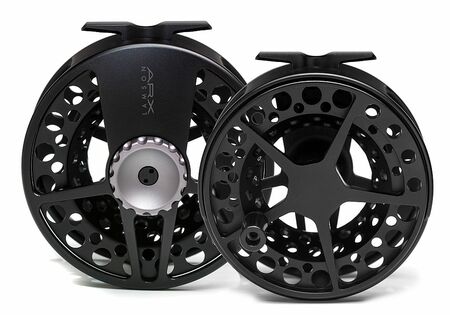 A nice snap T sends your fly across the riffle above the holding pool. You nailed it and get ready to throw a mend, and see the last loop of your shooting line has dropped into the nasty little gap between your spool and case. Fumble.

Arx doesn’t have that gap. Other reels that don’t have that gap can’t be palmed. Arx can. It was intended for moments like this.
Arx is a purpose-built reel for Spey or switch casting a variety of lines with maximum line control and reliability. The continuing evolution of Spey and Scandi lines, shooting heads, flat mono, etcetera demands a reel that can help prevent line snags.

Arx has a full cage to prevent line from escaping critical areas, and the gap between the case and spool is on the side of the reel to prevent thin lines from dropping into the space between. Normally a configuration like this would do a good job at preventing line fouling, but would preclude palming the reel. But as you can see from the photos Arx is carefully milled on the bottom third of the reel to expose a functional palming section. Even the drag knob has been designed to provide optimal grip without exposing a portion of the reel to line fouling.