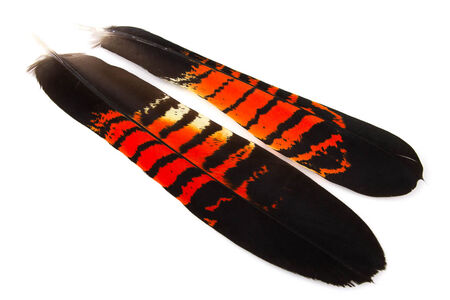 Red Tailed Cockatoo are sexually dimophic. It means that the sexes look different form each other. Male birds can grow to 60cm in total length and are mostly black in colouration. They however have visible large red bands/blotches in their tail feathers. Females are more brownish black and have little yellow spots in their feathers. Female tail feathers are very beatiful yellow and orange with black barrings

In fly tying terminolofy Red Tailed Cockatoo is better known as Banksian Cockatoo. Especially female Banksian tail feathers were used in classic salmon flies. The feathers have a lovely texture similar to Bustard feathers. The fibres marry well and the are also flexible. They also offer good fibre length not to mention the beautiful coloration. Of the old masters particularly G.M.Kelson fancied this material and it can be seen in many of his patterns as horns or part of wing.

_Banksian is an extremely hard to get fly tying material! _